Who are the parasites in Parasite? 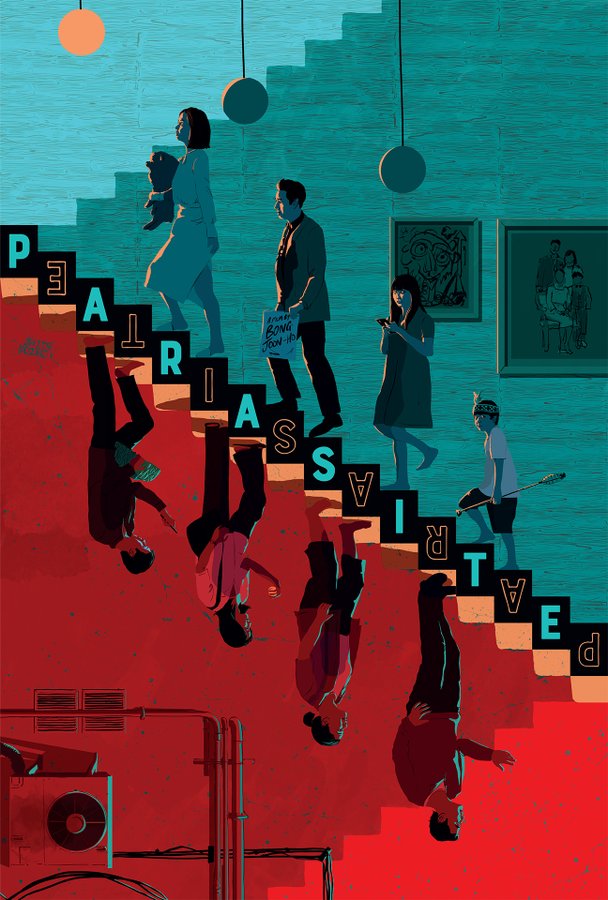 The title of Bong Joon-ho’s new international thriller almost asks us who the parasite is in his movie, Parasite. On one side, there is the poor family, the Kims. The other family is rich, the Parks. Who you think are the parasites in this family depends on your moral views. I think a more interesting angle to look at the movie and its characters is through political philosophy. There are some straightforward ethical arguments to condem the actions of the Kims I believe here, which might be less interesting in regards to the movie.

A Nozickean argument would argue that the parasites here are the Kims since they are the ones taking advantage of the by Parks by deception, lying, and even violence. A Kantian argument may show us something more interesting, one in which the Parks could be considered parasitic and the Kims not parasitic, but maybe still at fault.

The Kim family is living in a semi-basement apartment. The movie opens with them figuring out how to find new WiFi since the previous one they were jacking put a password on it. We then see that they are folding pizza boxes as outsourced labor for some pizza shop. A person is fumegating the street outside, yet the dad tells his family to leave the window open so that they could get smoe of their own bugs killed for free. The son in the family gets a tutoring offer from his friend, who gets a forged resume to get his “elite” credentials. Once in as a tutor, the entire family gets hired by the Kims by no ethical ways. The Kim family is an uber-rich Korean family living at the top of Seoul in a beautiful house that an architect designed and lived at. The dad was a tech CEO, his wife a stay at home mom, with a son in elementary school, and a daughter in high school. The mom is described as “simple”, the son is a carefree “troubled artist”, and the daughter seems to care less about what she learns in her tutoring sessions and more about her tutors. The family does not seem to have done anything explicitly shady or unethical to gain their wealth (besides a mention of not getting cops involved during the movie, possibly due to regular rich people shady lifestyles). The rich family just seems fairly normal people, self interested and status hungry monsters as usual.

The Lockean-Nozickean argument is that people should have the right to their property no matter what. The Kim family being so poor does not mean that they deserve any sort of redistribution of rich people’s wealth to poor people. To take away any of the wealth is nothing but stealing these people’s property. However, there may be some sort of minimal amount of wealth redistribution necessary. This redistribution is necessay because the ultra-minimal state would need to secure access to legal means for its citizens. Say there is a mafia that people have to pay to protect them from people taking their stuff or hurting them. If one of its citizens end up not being able to afford to pay for the mafia’s protection, the mafia must reconcile this otherwise it does not have a monopoly on coercion. The poor people must be able to secure private property and wealth to survive in the world by legal means, otherwise if all the wealth is taken and the mafia protects everyone else, they would die. However, there is nothing more the ultra-minimal state should do.

Kant has a similar line of reasoning. The state must secure a monopoly on coercion so that all of its citizen can realize their ends in a rightful state. The people must be able to have legal access to means of survival otherwise the state does not have a monopoly on coercion. The state must guarantee unconditional poverty relief, being stupid or having bad luck cannot be used to deny people poverty relief. If there is no unconditional poverty relief, poor people will be subjected to the arbitrary choices of other people, such as charity or luckily getting a job. Additionally, all citizens for Kant need to be able to transition from passive to active citizens. A passive citizen is not able to fully participate in public reasoning because of their socioeconomic status.

Both of these mean that the state may have more of a right to provide whatever means they deem necessary to satisfy these conditions. To be able to survive and rise through the ranks to become independent and active citizens, the state may have to provide public welfare such as food, housing, healthcare, and education.

Another small area of Kant, more precisely Varden, is in the distinction between formal and material wrongs. A situation can be one in which no rightful actions are possible. For example, in Nazi Germany, the rule was barbarism, not the exception. There was no just public authority and there was no reason for the informers to follow the law about speaking out against Hitler to this extent. So if a Nazi comes to the door and asks you if there is a Jew hiding in your apartment, lying would be on this account a formal wrong since in principle lying prohibits rightful relations for everyone, but lying in a state of barbarism is not a material wrong since it is a condition of violence and not right. Who was the parasite ?

On the Lockean-Nozickean argument, there is no sense of justification for the Kims taking advantage of the Parks on any account. They are able to live in a somewhat rightful condition, they have a seemingly legal means of survival. This seems like a stretch, however, given the state they find themselves in the beginning.

On the Kantian account, I think it could be argued that the state has not provided its citizens enough to account as a monopoly on coercion. One line sticks out, where the dad says how thankful they are for getting the jobs in the house of the Parks. He mentions a statistic (exaggerated or not) that they are lucky due to the fact that they live in a country where a security guard job opens up and they get 500 university graduate applications. If the state of Korea is in this situation, the Kims who are not college educated may not be able to even get jobs that people without university or advanced technical degrees would get in America. If they cannot get any even low paying jobs to work their way up, which seems to be the case in the beginning of the movie since they did not have any steady revenue stream between the four of them.

Additionally, the rich people are living in a society in which they exist in part because of the poor people. So maybe if the state (maybe not Korea right now) allows conditions such that poor people do not have any sense of unconditional poverty relief and the ability to survive, the state may be considered an anarchic or barbaric state. If this is the case, the Kims may have committed formal wrongs, but not material wrongs. The rich people may be the parasites in that they are the ones hogging more than a fair share of resources with the state to blame as well. The conceptual wrongs in the Soleimani killing Dinner at Kant’s
Latest posts Moral growth as necessary for perpetuity of the state Bernie Part Two - Medicare for All Silence as a critique of Descartes Bernie Part One : Unconditional Poverty Relief `White Nationalism The case for Bernie Legacies of the Third Reich: Concentration Camps and Out-group Intolerance Dinner at Kant’s Who are the parasites in Parasite? The conceptual wrongs in the Soleimani killing A Clockwork Orange and moral goodness The form of philosophy and film Untangling ideas from our persons My Top 10 of the Decade Hasan Minhaj and Bernard Williams - We Can’t Care About Everything War Crimes, Morality and Punishment, and the Gallagher effect Korsgaard’s Core Argument in Fellow Creatures Nation States and Human Rights Misology, Eve, and Zima Blue What is (Good, Bad) About Gentrification? Truth and Rashōmon Philosophy Briefs - A Perfect Moral Storm : Climate Change, Integenerational Ethics and the Problem of Moral Corruption Uzumaki Philosophy Briefs -The Hart-Fuller Debate Ode to the Bebop Getting Cancelled and The Eel Beaten Why Lessig is Wrong about Ito and Epstein NYC is Pretty The Lower East Side Dev and Tech Links